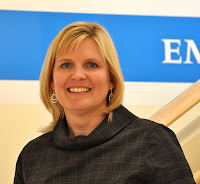 Kim Chrystie has been a driving force in EMC’s new global brand strategy.  The technology giant, headquartered in Boston’s famed tech corridor with nearly 50,000 employees worldwide, launched a significant campaign last year to build greater recognition of the leadership role it plays in today’s information technology transformation.
Using the theme, “Cloud Meets Big Data,” EMC linked two of today’s critical IT trends—cloud computing and the value of data through analytics.  EMC enables companies of all sizes to transform their businesses by better understanding of the power of their information and by insuring that such information can be used efficiently and securely.  Fundamental to this transformation is cloud computing.

The global campaign, targeted to senior business management-- particularly in some of the world’s largest cities, uses a broad range of media, but also tested a number of new options.
Kim Chrystie explains: “Working in a high tech company, things are constantly changing.  And for the last 5 years media and advertising have been rapidly evolving.  That is why the last 18 months have been extremely adventurous building EMC's global brand.  We have used traditional methods including airport and print advertising in established and evolving markets, as well as some new media such as iPad sponsorships.  Even though there have been a lot of lessons learned on acceptability of messaging and creative in some markets, interesting bidding wars in others, etc., the results have been fantastic.
Many would agree that much of the campaign’s success can be attributed to Kim’s “relentless pursuit of perfection,” as Just Media’s Alan May describes her work ethic.  He continues, “She never fails to continually refine targeting capabilities, question efficiencies and check how all programs are tracking against budgets.”  EMC’s current global effort was begun after a decade-long absence of significant worldwide messaging from the company.  Now the buzz from around the globe is impressive, as are the upticks in unaided awareness.
Kim understood that testing mobile while expectations were low could lead to valuable lessons. Part of the 2011 EMC brand campaign included advertising on New York Times, Wall Street Journal and Financial Times iPad apps.  Her willingness to experiment meant that the whole team, from creative to media, gained a better idea of how a key audience uses the devices and what content they engage with most.  Now EMC knows where to place its efforts and investments of time and money and has set benchmarks for future campaigns.
Kim has spent nearly 10 years at EMC, but started on the agency side of the business. Her strengths are not only in developing advertising and media strategies, but also in brand research, which ranges from testing messaging and creative, tracking brand awareness and preference, and analyzing trends.
EMC helps people and organizations bring the power of information to life.  However, we also realize that through Kim Chrystie’s efforts more of the world now understands that promise.